There have been belfries in the neighbourhoods of Pod Javorníkem, Pod Radhoštěm, at Lomná and at Bystré ever since Trojanovice was founded. The ringers rang the bells each morning. noon and evening as well as on the event of someone's death or to announce a fire.

The Belfry below Javorník

The belfry dates to 1941 and its con-struction is connected with the name of carpenter Karel Halamíček. Originally it was a simple belfry standing in the garden of shopkeeper Josef Mikeska, house number 33. Currently it is Mrs. Zdena Stavárková, who executes the function of the bell-ringer. 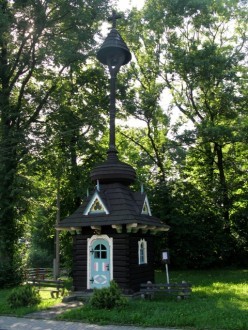 The Belfry below Radhošť

This belfry is situated by the road called Solárka in the neighbourho-od below Radhošť, close to the former school. It was built in 1971 according to the design by František Šmajstrla; local carpenters were supervised by Mr. Adamčík. The original bell, which was declared a Cultural Heritage, is currently in the Village Office archives and has been replaced with a working replica. Mr. Ladislav Šmajstrla from hou-se number 98 is the bell-ringer at the moment. 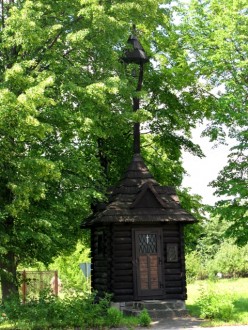 The Belfry at Karlovice

The belfry is situated on the premises of the Monument to the Strnadel brothers and Jan Knebl. It is the newest belfry in Trojanovice, consecrated in 1998. It was designed by architect Ales Krkoška and executed by the Jurák company from Ústí by Vsetín. The bell, weighing 35 kg, was cast by bell-founder Josef Tkadlec from Halenkov.

The bell was donated by the village mayor Drahomír Strnadel from house number 454, who performs the duties of the bell-ringer. 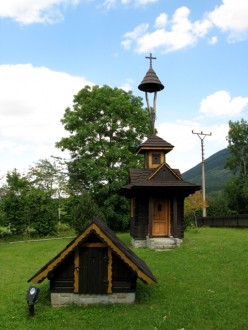 The Belfry at Bystré

This belfry is obviously one of the oldest in the village. Its bell from 1769 is listed a Cultural Heritage, the same as the Statue of Virgin Mary dated to 1720, which stands next to the belfry. The belfry uses a copy of the bell whose original has been deposited into the village office archives. The original belfry used to be smaller and very simple. Carpenters Josef Káňa and Valentin Stnadel rebuilt the belfry to its current look in the mid 1950s. Bell-ringing is the task of Mr. Pavel Uhlář from house number 593. 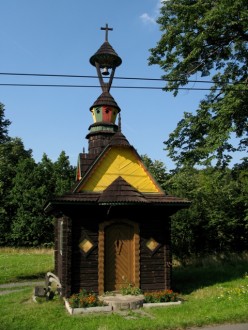 The Belfry on Horečky Hills - Guardian of Beskydy mountains

This open spiritual building symbolizes the disagreement of inhabitants to coal mining in the Beskydy Mountains. The initiator of the construction is the civic association Naše Beskydy. Modern bell design is the work of architects Kamil Mrva and Martin Rosa.

The building is based on the Wallachian folk tradition of simple wooden bells. Next to the all-wood construction with a shingle shell, there are eight-meter masts of three larch beams carrying a 30 kilogram weighing bell from the workshop in Halenkov, which will ring the knell of the Frenštát mine.

In addition to the logo of the civil association Naše Beskydy, the emblem of Trojanovice and Frenštát, the bell bears the names of 37 towns and villages that joined together against coal mining in the Beskydy Mountains. At the bottom of the bell is a quote from a Frenštát native Josef Kalus, "Who shames my mountains, as if he shamed me, who praises my mountains, how he would bow to me." For the first time, the symbolic death knell sounded on the third anniversary Locking the Wallachian Land for 100 years on May 15, 2010 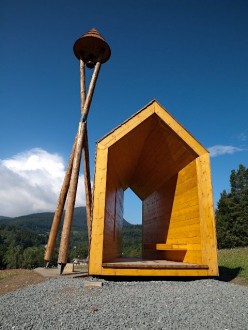