Mountainous terrain, forests, clearings, picturesque corners, fresh air, clear brooks and breathtaking panorama of the Beskydy Mountains make Trojanovice an attractive tourist locality. The first mention of the village as a recreational site dates 250 years back: as early as 1768 guests were treated here by sheep's whey, quiet and fresh air. The third Trojanovice reeve even planned to have a log cabin built for visitors on the deforested hill called Okruhlý (986m above sea level).

Mountain Club Radhošť was founded in 1884. As the first Czech sport and tourism society in the Austro-Hungary Empire it promoted culture, education, technical progress. sports and tourism. Štěpán Ježíšek and Eduard Parma were two of the eminent founders of the club and even the first Czechoslovak president, T G. Masaryk, was a member of the club.

Mountain Club Radhošť takes credit for building of tourist shelters Libušín and Maměnka at Pustevny in 1899; they were built to the designs by architect Dušan Jurkovič and in 1935 opened a chalet on Velký Javorník. All these structures still draw large crowds.

Pustevny (Hermitages) have been called after hermits who lived iure until 1874, when Felix, the last of the hermits, died. Pustevny form a gap between Okruhlý Hill and the summit of Mount Radhošť. They are situated at 1018 metres above sea level. In time they became an important tourist resort, dominated by Jurkovič's shelters, timber buildings in folk style, with interiors decorated with murals by Mikoláš Aleš. Other old buildings at Pustevny are the stone chalet Šumná and the Tanečnica Hotel. In 1965 the Valaška Shed was built.

The Cyrilka lookout, another interesting sight at Pustevny, stands by the path from Pustevny to Radhošť and offers magnificent views of Pustevny with the summits of Tanečnice (Dancer), Kněhyně, Čertův mlýn (Devil's Mill) and Lysá hora (Lysa Mountain).

There is also a splendid view of Trojanovice and the town of Frenštát p. R., in good visibility even of Praděd Mountain in the Velké Jeseníky range. In the east there is a chance to get a glimpse of the Velká Fatra or the giants of the Vysoké Tatry (the High Tatras). 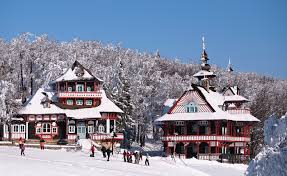 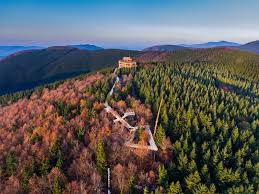 The one-seat chairlift from Ráztoka Valley to Pustevny started running on March 4th 1940. The date is a turning point in the history of traffic. Although the idea of fastening chairs to the cargo lift used for carrying timber is attributed to Canadian lumberjacks, yet the first professionally built chairlift, not only in Europe but according to accessible information in the whole world, operated in the Beskydy Mountains, in Trojanovice.

It was built by Frant. Wiesner company in Chrudim and reconstructed once (in 1957), which doubled the capacity and increased speed. The chairlift railway as we know it today was situated to a different place, which doubled it in length and increased the elevation of the cableway. Utilization of latest technology improved conveying speed and transport capacity. The improved chairlift started operating in 1987.

The Horečky, a complex of low hills (little hills = horečky) with the same features as the Beskydy Mountain, yet at a smaller scale, are a unique locality that equals the importance and fame of Pustevny. They also play an important part in the history of Trojanovice, as it was Antonin Bača-Horečka from the Horečky who initiated the proceedings resulting in the autonomy of the village.

Frenštát entrepreneur Petr Polach chose the Horečky for his plans in tourist enterprise and to promote his own company. In 1932 he built a cabin camp there, which he later extended with three buildings of a unique recreation centre — Pantáta (Goodman, June 17th 1934), Panímáma (Gammer) and Mariánka (1938) plus a summer swimming-pool (1934).

This development made the Horečky a much sought-for tourist destination as well as the venue for balls, parties, annual meetings and company seminars.

Even in the communist era the Horečky were a popular site and until the 1980s they were kept in good condition. The complex of "good-man' Polach´s buildings was made over to the ROH (Trade Unions) and renamed Gustav Kliment Recreation Centre. The descendents of goodman Polach got the property back in very poor state. So far, the restoration work has not started.

After Jiří Raška, the most famous Czech ski jumper, had won the first gold medal at winter Olympics in the country's history (Grenoble 1968), a K90 ski jump was built at the Horečky in 1973. At that time it was the highest artificial surface ski jump in the world. Nowadays the Horečky reminisce about their fame and hope for a new nitiative that might revive them. It might even come in the form of the urban project for the Horečky restoration by architect Kamil Mrva. 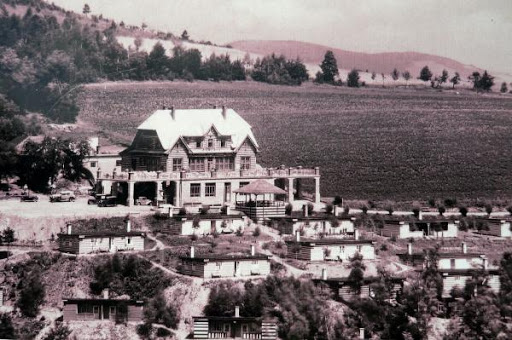 Beginnings and first development of downhill skiing in the area can be seen in the efforts of the Czech Ski Association, Prague to build a chairlift to Pustevny and thus provide transport of skiers and tourist to the mountains. The request for the chairlift dates from 1939 and in 1940 it started operating. Pustevny facilities currently include a two-seat chairlift, eight ski-tows for adults and three tows for children. The grounds are managed by SK Skialpin - www.skialpin.cz

Cross country skiing is a very popular and healthy activity and the Beskydy Mountains offer ideal conditions for this sport discipline. Pustevny has the advantage of undemanding tracks and sufficient elevation above the sea (about 1,000 metres above sea). SK Skialpin is in charge of their maintenance.

It is a very popular running track. Refreshments can be obtained at Skalikova Louka chalet and Mir chalet (open 10.00 - 6.00 all year round).

Both tracks are undemanding, with several ascents and descents a kept tracks. They are used purely for training.

Thanks to Pohorská jednota Radhošť (Radhošť Mountain Club) a chalet was built on the top of Velký Javorník in 1935. The wooden chalet draws crowds of tourists as Velký Javorník belongs to the most frequented peaks in the Beskydy Mountains with splendid views of Frenštát fold, Mount Radhošť, Ondřejník and Lysá Mountain. It is also a popular starting point for paragliding and hang-gliding. The chalet ,pens daily except Monday from 9.00 to 5.00. 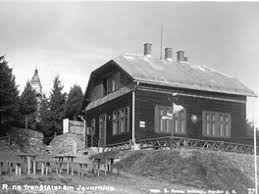 Mount Radhošť often carries the attribute "memorable". Its significance the interest of inhabitants make it the most well-known and most portant peak in the Moravian-Silesian Beskydy. On the top of the mountain stands the sculpture of Sts. Cyril and Methodius and there the Radhošť Hotel and a transmitter too.

In good weather visitors can get glimpses of the Jeseníky and the Vysoké Tatry (the High Tatras). The mountain is so popular also because the trip from Pustevny to the peak is easy and comfortable.

The top of Tanečnice may be reached by a short walk from Pustevny. It is not suitable for views as it has been reforested. There are stone cairns built by tourists who bring the rocks to the peak.

It is a very demanding day trip that is very popular particularly for its many lovely views and atractive spots. As it is a really long and difficult trail with big elevation it is advisable to divide it into two trips - separate climb to RadhoS'f and back and the climb to Javorník.

It is a demanding day trip, yet it is very popular with hikers who seek quiet, not crowded trails and lovely view.

Watching the landscape beauty of Trojanovice from your car window does not give you an adequate experience. It is much better to use more personal means, like walking or even better, cycling, as the area is quite large. Mountain bikes are perfect means of travel for family sightseeing trips. There are trails of different length and difficulty. Joining the main three will form a closed circle.

It is an easy and simple trail suitable for families with children. It starts at the Maralak pub and runs across Trojanoice clearings below the hills to the Horečky Hills. The trail passes a lot of attractive places - besides crosses, chapels, belfries and pubs it runs past the Monument of the Strnadel Brothers and Jan Knebl, which is well worth visiting.

This is the most difficult trail in Trojanovice. Cyclists have to deal ith many ascents; however, they are rewarded with a number of nic views and can get refreshments in several establishments ,along the trail: Rekovice pub at the Horečky, Velký Javorník chalet, Zbojnická koliba at the Pindula Gap and Ráztoka hotel restaurant or bufet "U Bobra". Of course, there are numerous refreshment facilities at Pustevny. Tarzanie, the high rope centre near the Ráztoka hotel, cts adventure-minded visitors.

From the Pustevny side it is a very easy trail; from the start it traverses to the gap of Tanečnice and then runs down to Maralák. The downhill trail leads through deep forests and along the Bystrý stream.

Trojanovice Cycling Circle      (the route is marked on the cover map)

Joining the three above trails forms a circle which runs through the whole of Trojanovice. It is a very demanding route for fit cyclists with good equipment for unpaved grounds; however, it is really varied. Cyclists ride across lively tourist resorts and pass spots where they hardly ever meet anybody. They go through clearings and along roads with scenic views down into the village valley, passing by many pubs and refreshment facilities as well as past small church and cultural structures which make the Trojanovice clearings so unique.

(Hang-glider on Velký Javorník, View of Noříčí and Velká Stolová) 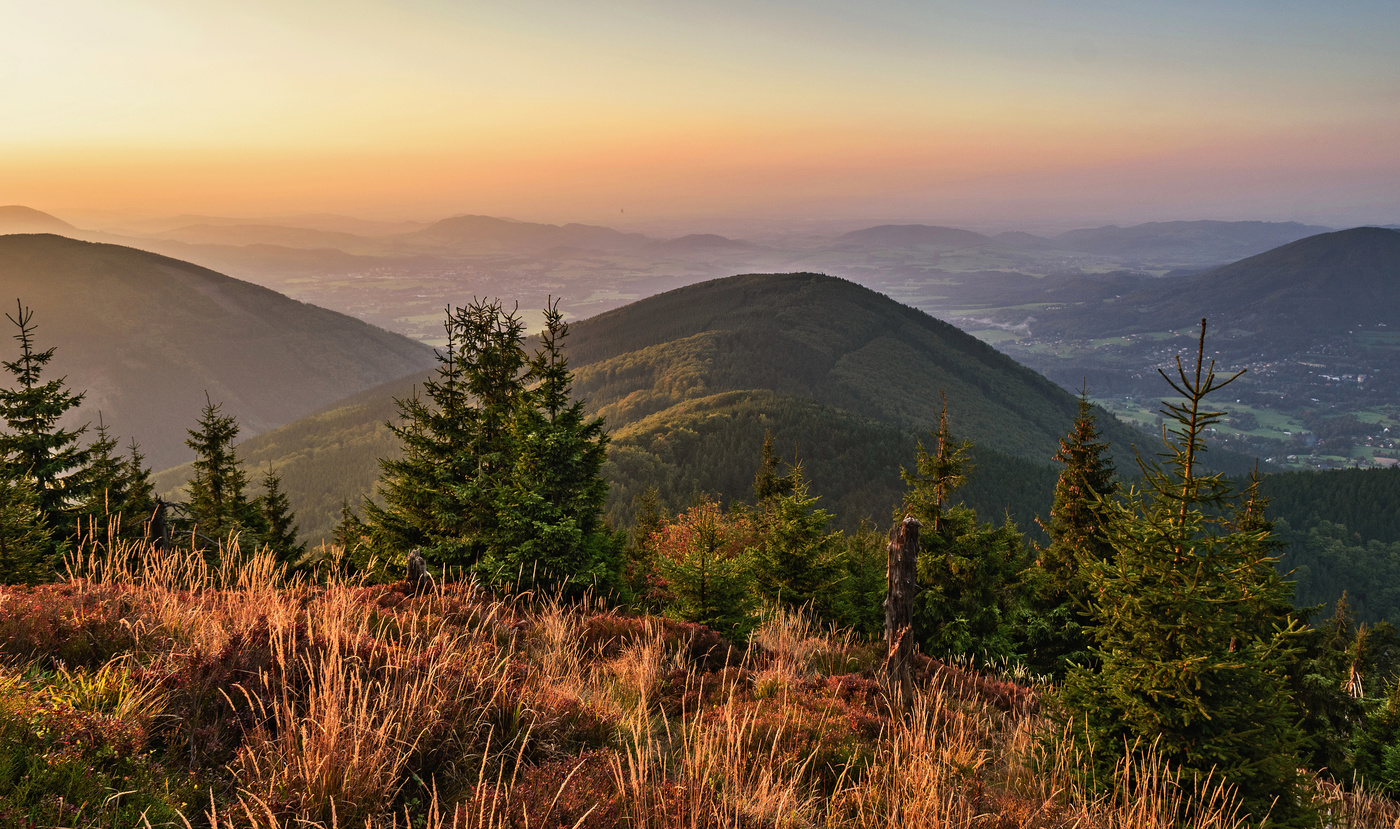