The Chapel of Sts. Cyril and Methodius

Since 1898 Mount Radhošť has been inherently connected with the chapel that was built there at the expense of 20,000 gold coins. The idea first rose in 1862, when a festival was organized on the top of the mountain and 120 gold coins were collected. The idea was revived in 1881, when a similar event fetched 500 gold coins. In 1888 Count Kinský donated the land and building material. A new collection was organized in the years 1889-1895 — it fetched 8,000 gold coins. On that occasion artist Adolf Liebscher painted his triptych Wallachian Madonna, which was displayed at the Czecho-Slavic Ethnographic Exhibition in Prague. The committee appointed to build the chapel bought the painting, worth 4,000 gold coins for the price of 400 coins. The artist donated the rest to the chapel. The triptych was then displayed all round Bohemia and Moravia and fetched 6,000 gold coins. The original is currently displayed in the chapel.

Building of the chapel started in 1896; the foundation stone was laid on the 5th of July 1896 and on the 11th of September Olomouc Archbishop Theodor Kohn consecrated the finished chapel and handed it over to the public. In 1905 the society of Matice Radhošťská, whose task was to maintain the chapel, was established. It gave impulse to reface the stone outside walls in wood and building a new bell tower (1926). In 1930 Frenštát native Albín Polášek, who lived in the USA, presented Matice Radhošťská with the sculpture of Sts. Cyril and Methodius, which now stands outside the chapel on the summit of Mount Radhošť. The so-ciety was dissolved by the communists in 1951 and its activities were not re-established until 1994. Since then the chapel has been rewired (1995) and the bell tower has been restored. Matice Radhošťská also had a new altar from carrara marble made. At the moment the society finances the re-storation of the stained glass windows. Total costs of the repairs amounted to nearly five million crowns in 1995-2009. 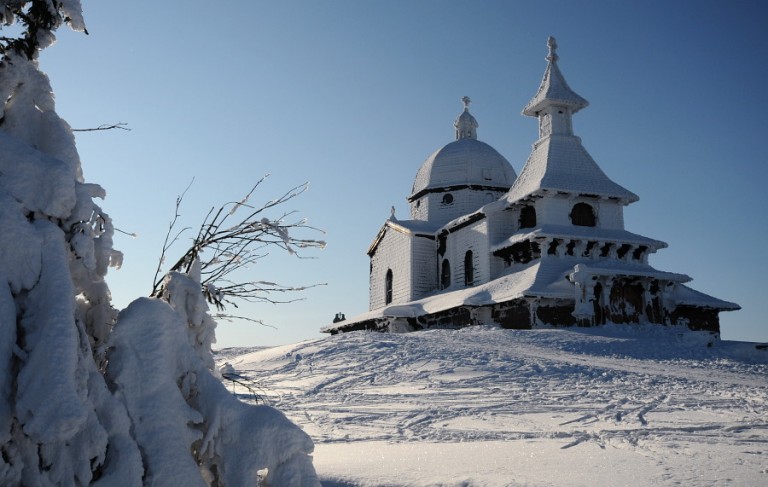