The tradition of putting up the Maypole is very old and ties together with the popular spring holidays which have their roots in pagan communities. Thus for example traditional pageants at the Frankish court were moved in honour of spring from March to May (755). The literature of the medieval minstrels speaks about "Liebesmaien" - decorated green twigs - that were supposed to be the pledge of love as early as 13th century. May pageants and dances have been noted in Italy, Germany, Sweden and other countries. It was in the days of Frankish Empire that enlistments took place on May 1st. Recruited men played pranks and games, the tradition of which has survived till these days. There is a written mention dated from 1422 when a young man won the hand of his bride-to-be with such act. Unfortunatelly, after 1933 the holiday of the spring, resurrection and rebirth was seized by Adolf Hitler and misused for his propaganda of the rebirth of the German nation. The same happened after 1945, when the Nazi propaganda was replaced by the communist propaganda. In spite of that, the celebrations of spring and putting up the Maypole tradition have survived till these days. In Trojanovice Maypoles are put up by civic associations (Karlovice), firemen clubs (Lomná), sports clubs (Pod Javorníkem, Bystré) and Wallachian dancing ensembles (Pod Javoníkem). There are also private Maypoles that are put up outside houses where there are marriageable girls. Both the event of putting the Maypole up and the event of pulling it down at the end of May are connected with merriment, music and dancing of Wallachian ensembles or local music bands.

The traditional wake on Radhošť is held on July 5th to commemorate the living legacy of Sts. Cyril and Methodius, the two missionaries who brought Catholic faith to our lands. Each year the wake is attended by the faithful from the whole neighbourhood and is connected with the Holy service celebrated traditionally both in the morning and in the afternoon. The wake is organized by Matice Radhošťská Society, which donates all earnings towards the reconstruction of the chapel. The holy services are celebrated on Radhošť each Saturday during July and August.

There are two active football clubs in the village - TJ Bystré (www. tjbystre.wz.cz) and TJ Kozinec (www.tjkozinec.tym.cz). Each of them has got its own facilities and organizes regular memorial tournaments. TJ Bystré holds the traditional and much-frequented Jiří Jaškovský Memorial to commemorate the tragic death in a traffic accident in 1961. TJ Kozinec organizes the Jaromír Vávra Memorial to commemorate the tragic and still not clarified death of Jaromír Vávra in 1990.

Mr. Jan Tichavský, chairman of KDU-ČSL in Trojanovice has organized the festival since 1969. The harvest festivities continue the tradition that was broken off in the era of the First Czechoslovak Republic and symbolize thanksgiving for the summer crops.

Locking up of Wallachian Lands (May)

The festival of locking up the Wallachian Land has been organized by the civic society Naše Beskydy (www.nasebeskydy.cz) at Pustevny and on Radhošť since 2007. The event is tied to the history of the Wallachian rebellions and symbolizes the defiance of the inhabitants against the plans of the mining companies that refuse to give up the coal supplies in the ground below the Beskydy Mountains. The decree about the lock-up has been signed by 24 towns and villages in the region, which represent 187,000 inhabitants.

The memorial deed "Decree of locking up the Wallachian Land for 100 years" has been put into the foundations of the Chapel of Sts. Cyril and Methodius on Radhošť. There are four keys to the box: three are kept by the mayors of Trojanovice, Frenštát p. R. and Rožnov p. R. The fourth one has been deposited at the Ministry of Environment in Prague; former minister Martin Bursík handed it over to his successor. He takes part in the event regularly and encourages the opposition against the powerful mining lobby.

Mr. and Mrs. Hrabal have been organizing this popular winter event at Pustevny since 1998. In that time more than a hundred snow sculptures have been created and the displays have been admired by more than 100,000 viewers. See more at www.dagi.cz.

Trabant club in Frýdek-Místek (www.trabime.cz) holds annual meetings of Trabant cars in Trojanovice. The meetings take place in winter under the name Radegast and entice great interest of viewers.

CS Trojanovice is an event arranged by the Classic Motor Sports Club Frýdek-Místek. This competition for historic motorbikes traditionally starts by the Památník bratří Strnadlů a Jana Knebla (The Monument to the Strnadel Brothers and Jan Knebla), which gives it the feeling of authenticity and uniqueness. 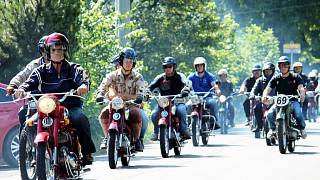 Brigades of voluntary firemen inherently belong to every village. The firemen not only take care of the villagers and their property, they also organize cultural and community events. Trojanovice host fire brigades from the area and hold competitions in fireman sports (men's category). They also prepare Children's Days, Pulling down the Maypole, Firemen's ball, winter skating and firemen's party. (www.sdh-trojanovice.com).

IFB InternacionaInf federate bobbingu - www.bobbing.cz) is an organization functioning in the Beskydy Mountains since 1993. IFB organizes sports and entertaining events for individuals and families, testing of ski-bobs available on Czech market and surveying routes suitable for ski-bobbing tourism. Each year IFB holds events with national and international participation. The traditional Judita's downhill run.

(December 29th - ski-bobbing down one of the Beskydy hills), world championship in ski-bobbing and IFB Masters are some of the most famous events. 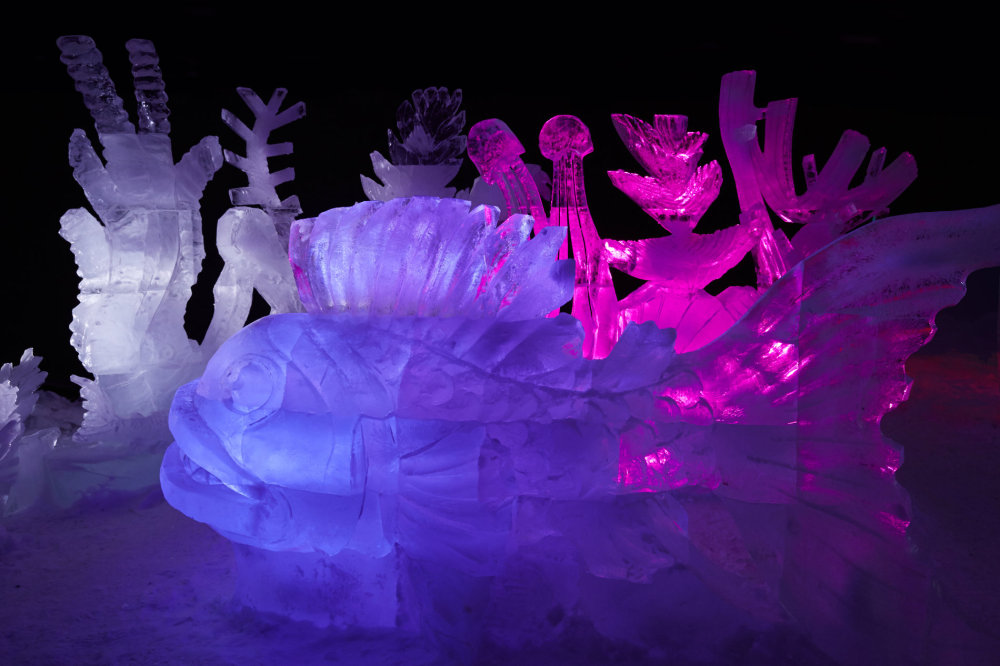 This event of the national significance is organized by the horse-riding club Trojanovice. The aim of the championship is to create optimal conditions for training young horses and to test their qualities and use the results to control the inheritance in horse breeding in the Czech Republic.

Every year, the second Saturday in July Trojanovice host the Western show under the guidance of Ivo and Markéta Rara from the Ranch at Žary. (www.ranchnazarach.estranky.cz). In addition to speed competitions for small and adult riders there are shows of whip and lasso handling, adrenalin "cliigitovka" (trick riding) or drilling horses, such as laying down the horse. In the accompanying programme people can enjoy pony and carriage rides or choosing the most likeable pair - rider and horse.

In 2001 the civic association Karlovjané started to organize annual exhibitions of Trojanovice artists. The exhibitions take place every year in August at the Monument of the Stnadel Brothers and Jan Knebl. Trojanovice inhabitants exhibit their own handicrafts from burnt clay, wood metal, stone and cloth. Visitors can also see works by local painters and photographers.

Exhibition "The Magic of Christmas" (December)

This annual exhibition is traditionally organized before Christmas by Mrs Marie Musilová together with Sbor pro občanské záležitosti (Committee for Civic Matters). Mrs. Musilová uses ginger-bread to make charming nativity scenes with dozens of figures, Christmas decorations, Christmas bulbs etc. The exhibition is always opened with the performance of children from the Jubilee school of T. G. Masaryk, where the exhibits are displayed. The much-frequented exhibition is open to public for the whole of December. When it closes down, the gingerbreads are sent to the Pardubice Gingerbread Museum. A similar exhibition called "Merry Easter" takes place before Easter. 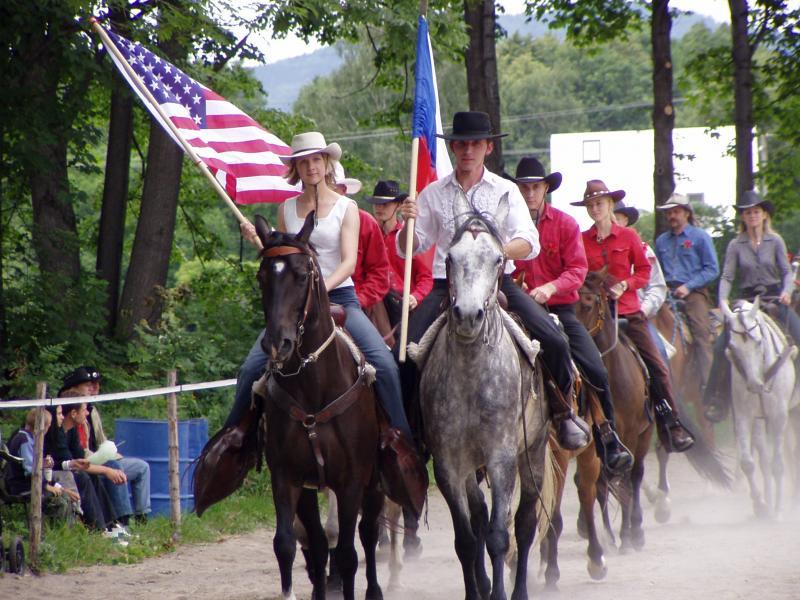 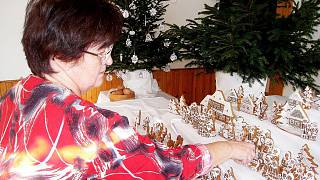