At first sight you notice above all colours and incredible variety. Yet, on closer look, everybody stops in amazement. Geologically Trojanovice are part of the Western Carpathian flysch belt. It is a belt of sedimentary rock - sandstone, clay stone and pudding stone, which alternate in different thickness of deposits. The sedimentary rocks originated in Mesozoic Era in the deep-sea basins of Tethys Sea. In early Tertiary they were folded and in several thrust moulds moved over earlier rocks of the Bohemian Massif. The area of Trojanovice is formed by the Silesian thrust mould. In that way the range of the Moravskoslezské Beskydy and of course Mount Radhošť and Velký Javorník were raised. Over 100 million years old shells of molluscs from the dinosaur era (amonnites) have been preserved in the area. The biggest and most famous imprint, which was for a long time thought to be an imprint of a sea reptile backbone, is stored in Moravské zemské muzeum in Brno. Deserted drifts may be found between Kyčera and Kozinec, where they mined iron ore - pelosiderit - as recently as 19th century. One of the foundation stones for the National Theatre in Prague is a sandstone block from Mount Radhošť. Small deposits of natural gas have been discovered in Trojanovice and in the depth of several kilometres there are also deposits of black coal; mine towers were built over the test holes before 1989. Even nowadays there are efforts to open Frenštát Mine. As the mining territory covers almost the whole Trojanovice area, opening of the mine would destroy the history of the village. Trojanovice are orographically part of a large system (province)of the Western Carpathians. The northern (lower lying) part of Trojanovice lies in the Frenštát furrow, from where very steeply rises the ridge of the Radhošťská hornatina (Frenkat Uplands). Mount Radhošť is the highest and most famous peak on the Trojanovice territory (1129m). 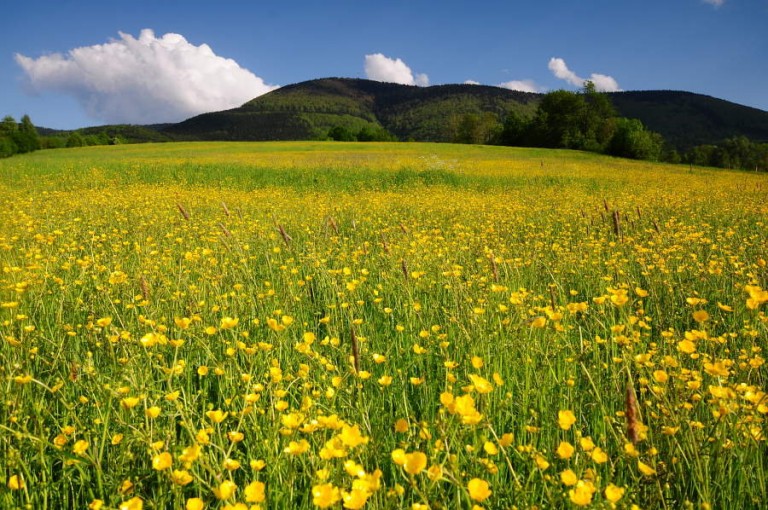 Dozens of small rivers, streams and brooks create a splendid mosaic on the 36 hectares of the village area. They spring from the foothills of the Beskydy and run into the valley as rivers the Lubina and the Lomná. The biggest stream is the Bystrý, other noted streams are the Lánský Brook, the Radhošť Brook, the Rokytný, The Velký Škaredý and the Malý Škaredý. There are also several water surfaces and a number of smaller and larger pools. Some of the large water surfaces are to be found on the Lubina River and on the Lánský Brook. Along the village border in the direction from Malý Javorník towards Pindula Gap - Velká Polana - Radhošť - Pustevny and Tanečnice runs the borderline of the Black Sea and Baltic Sea drainage area. 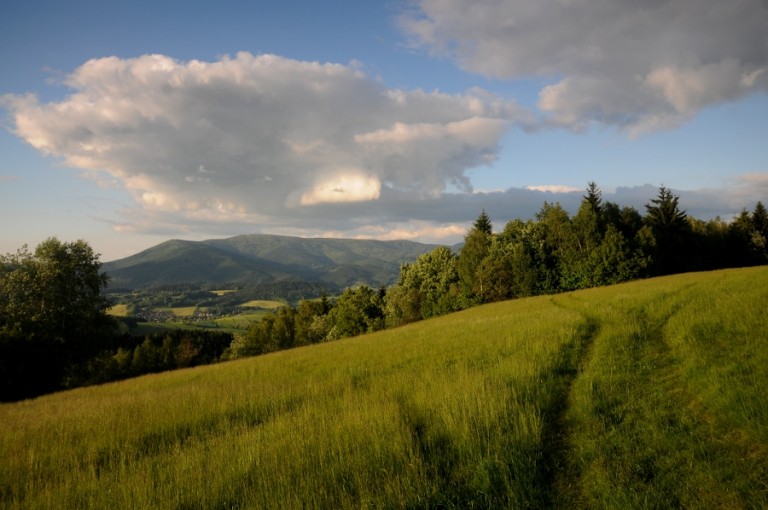 Forest in Trojanovice covers the area of 2,440 hectares. Their current appearance differs greatly from original virgin forests. The territory is chiefly grown by spruce. Beech trees cover the steep slopes of the Radhošť Uplands; other leafy trees include common maple, ash, hor-nbeam, lime-tree and oak. Conifers are represented by fir, larch and pine. Growths of ash, alder and willow have been preserved along the water streams and on the spring areas. Forests in the Nature Reserve Noříčí and the National Nature Reserve Radhošť are exceptions. 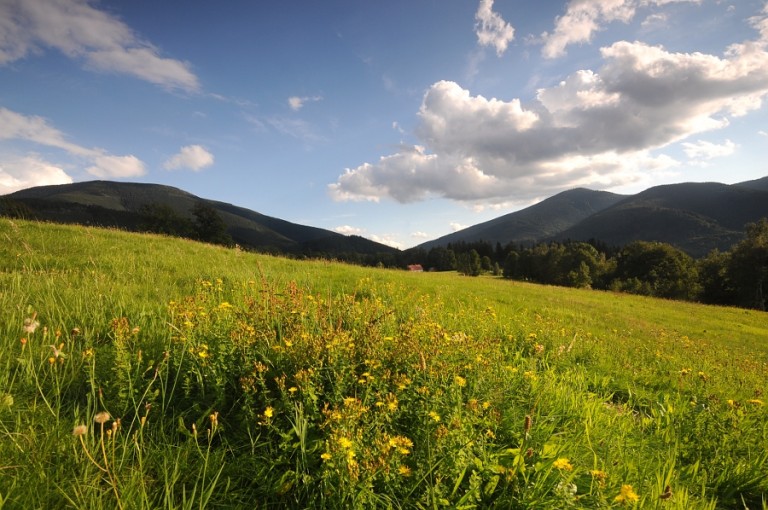 The Noříčí Reserve is composed of forest growth on stony slopes. It includes a wealth of tree species aged about 150 years. It spreads at the elevation of 680 to 1047 metres above sea level on the area of 38ha. 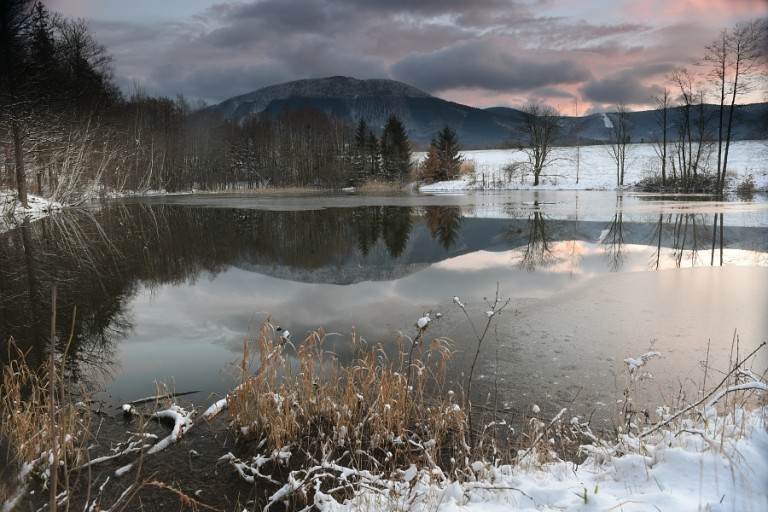 National Nature Reserve Radhošť is among the most valuable parts of the Beskydy nature. It spreads on the northern slope of the memorable Mount Radhošť at 660m to 1129m above sea level. The area of 145 hectares is a home to a wide range of overgrowth typical of the highest elevation of the Moravskoslezské Beskydy (Moravian-Silesian Beskyds). The forest there (mostly spruce) is exposed to harsh climatic conditions, which causes the trees to form the so- called flag shape. These are followed by beech growth more then 180 (respectively 110) years old. The undergrowth lists for example sweet woodruff, wood anemone and majanthemum (May Lily); in damp places it is the snowdrop, corydalis, spleenwort, monks hood and dentaria gladulosa. 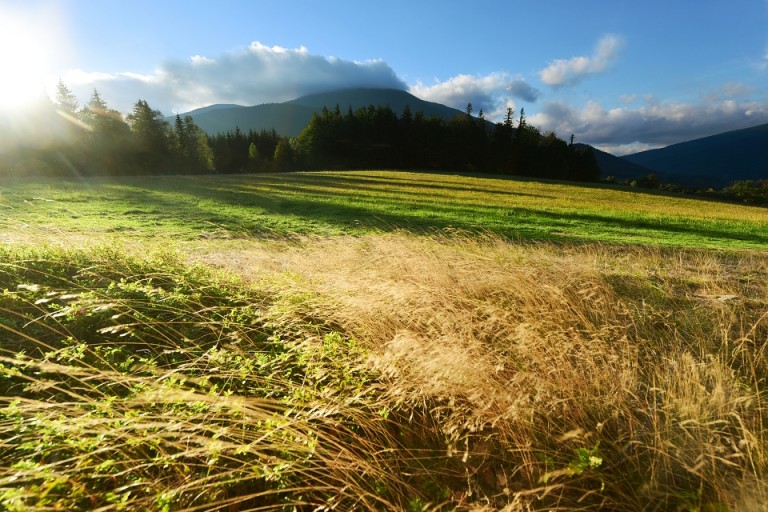 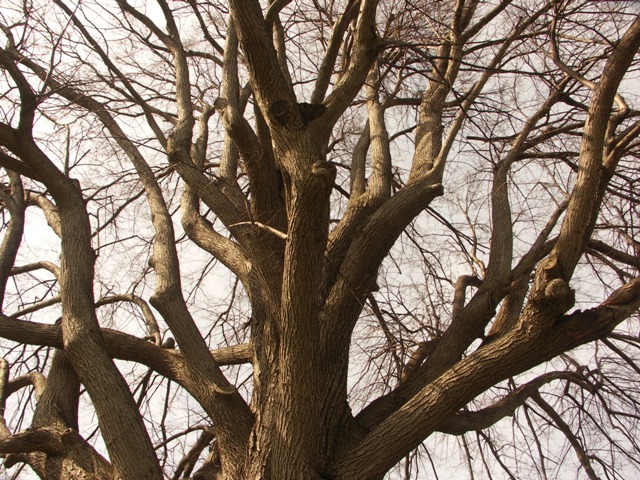 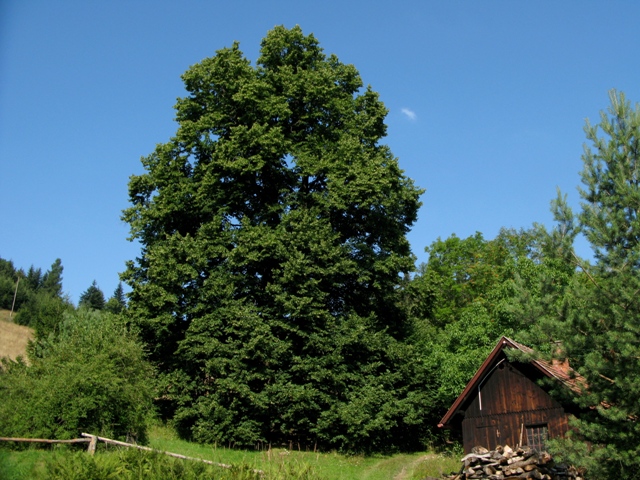 Originally wooded area began to change in the 15th to 17th centuries in connection with the Wallachian colonization and development of sheep breeding - it meant the spread of mountain farming from valleys up to the mountain peaks. There were several sheep pens in Trojanovice. The end of the 18th century brought about the end of sheep breeding and the beginning of industries - and that meant reforestation of meadows and pastures. Varied flora of the meadows and pastures was developing for long centuries, when people cleared the forest and started to farm - cut grass and tend sheep and cattle. Unfortunately, a lot of land was gradually drained; bosks were ploughed up and frequently overfertilized and allochthonous species of grass were sown. In spite of all these changes there are still multicoloured meadows full of white moon-daisies, bluebells, pink cuckoo flowers and yellow hawks beards in Trojanovice. As to the botanical features, the zone of the former Russian field range is particularly interesting - experts are carrying out biological research and steps have been taken to proclaim the area a Nature Reserve. Spring season brings out brilliant carpets of ramsons, wood-anemones, snow-drops, spring snowflakes and cowslips in the leafy and mixed woods. There are several rare species worth mentioning as well: martagon lily, bog-bean, gladiolus imbricatus, lousewort and even monks hood, which is a protected species in Europe. Mountain meadows pride themselves on gentian, maiden pink and golden cinquefoil. There are plenty of blueberries and cranberries to pick. Orchids are another special plant group - elderly people call them "cuckoos". The Trojanovice territory is also the home of Common Spotted Orchid, dead man's thumb, twayblade and marsh helleborine. Fenlands play an important role in the countryside. They are able to absorb an incredible amount of water and in this way they contribute to retaining water in the area and preserving a great number of rare plants. However, many such localities have disappeared in Trojanovice and with them have vanished carnivorous common sundew and calcareous grass of Pamassus. 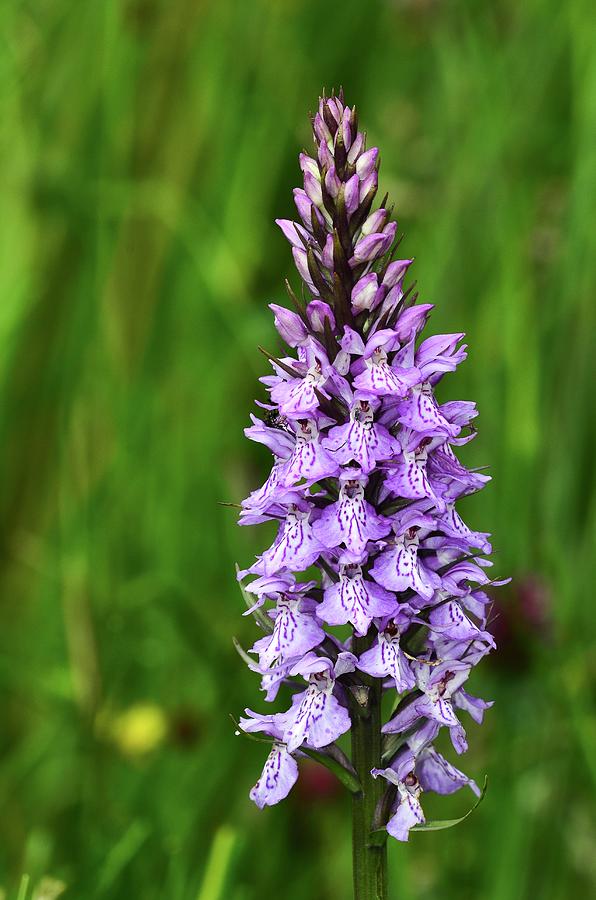 Mushrooms were used to variegate the poor Wallachian food, some species were also used in folk medicine and others were changed into utilities. There are dozens of edible mushrooms as well as decay fungi in the Trojanovice area. One can discover hoof fungus on beech trunks, hoof fungus Fomitopsis Pinicola on firs and spruces. Saprophytic fungi appear on decaying twigs, leaves or fir-needles. Greasy Club Foot, Collared Parachute and Yellow Leg Helmet are abundant, In the past, Hen of the Woods, vulgarly "goat tit", was quite easy to find in the woods around the village, though today it is listed among the critically endangered species. Mycorrhizas - coexistence of the fungus fibres with the roots of trees is typical for a wide range of fungi, particularly for various types of boletus, milk-cap and russula.

Long-time development of the countryside since the arrival of the first settlers has resulted in the diversified composition of fauna in Trojanovice and the surrounding area. Extensive timber felling, changes in the species composition of the woods, intensive farming, hunting and planting of allochthonous tree species must be mentioned among the most marked effects that caused decline and extinction of some animal species. On the other hand, there are other animals that either spread spontaneously or were brought in. Despite all these changes the Trojanovice fauna can be assessed as varied and manifold. Rare species of invertebrates list here for example swallowtail (Papilio Machaon), large Blue (Maculinea Arion) or noble crayfish. Amphibians make a group of vertebratea who are comfortable in wet spots, fenlands, water reservoirs and brooks: fire salamander, alpine newt, yellow-bellied toad or European toad. Reptiles include viper, ring-snake, lizard or slow-worm. Birds constitute a group of animals which was studied in great depth. There are many bird species on the territory of Trojanovice that live here permanently and in abundance. However, there are also species that are rare and endangered. Two bird zones have been proclaimed in the CHKO Beskydy since the Czech Republic became a member of the EU. 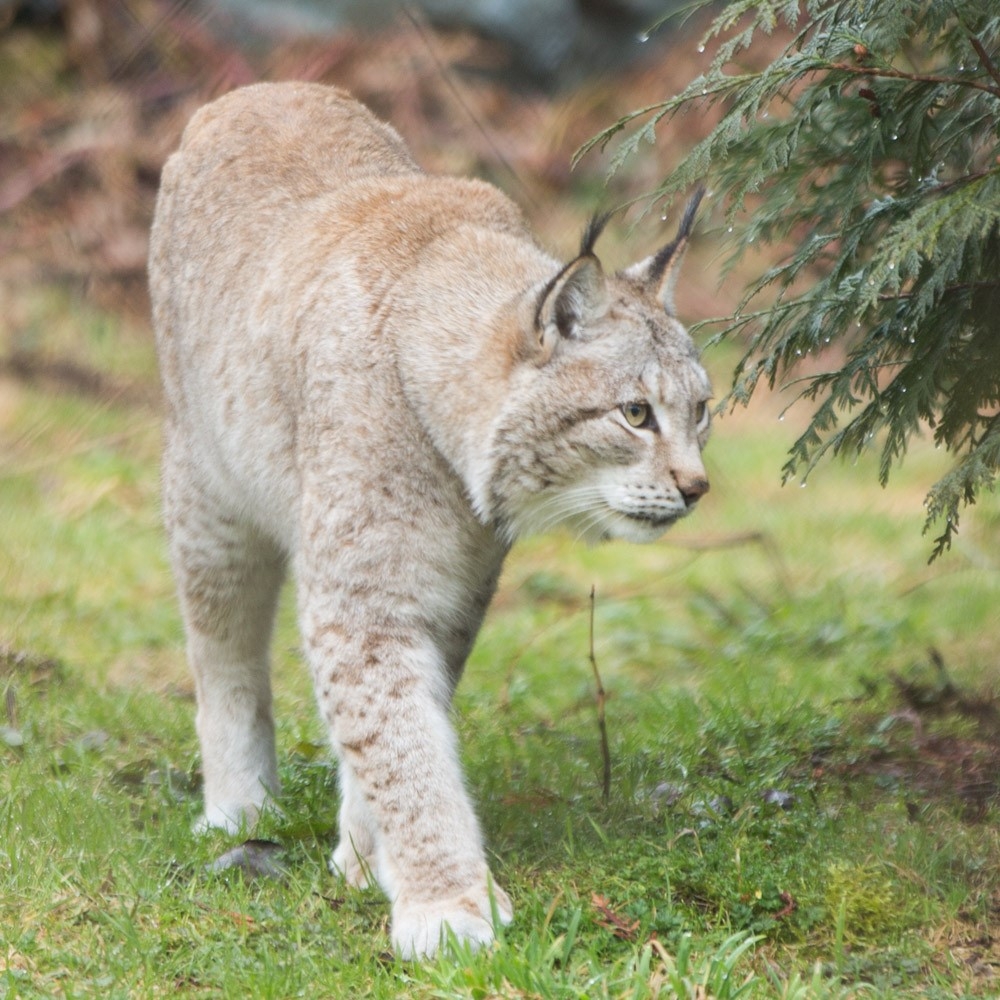 Since 1973 about 80% of the Trojanovice territory has been part of the Protected Landscape Area (CHKO) Beskydy. There are two small-area protected zones - National Nature Reserve Radhošť and Nature Reserve Noříčí. Biological research is carried out at other valuable localities. The territory is also included in the protected area of the natural water storage. On entering the EU the whole Protected Landscape Area Beskydy became listed among the noted European Localities. Trojanovice area is interwoven by a number of supraregional and regional bio-corridors and embodies several supraregional and regional bio-centres.