The Statue of Radegast

Sculptor Albín Polášek (*14.2.1879, +19.5.1965) made the statue of the pagan God Radegast for Pohorská jednota Radhošť (Mountain Club Radhošť). It was moved to its pedestal twice. During the first journey,in 1930, the lorry with the statue got stuck in an abrupt turn at Pustevny and six pairs of draught horses from Trojanovice had to pull it to its destination. After the statue had been positi-oned on the pedestal, heavy rain accompanied by a storm broke out. The lightning killed one of the soldiers holding honour guard. The statue was made from artificial stone which did not withstand harsh weather. The Regional Institute of Art Care in Ostrava then decided that a copy should be installed on Mount Radhošť instead of the valuable original. Jan Sobek from Leskovec, a monumental mason, and sculptor Jaroslav Machala from Vsetín, who supervised the work, felt highly honoured by the commission to carve the copy from natural granite. Hence the second journey of the seven-ton statue up the mountain to over one thousand metres above the sea level, which took place in July 1998. The statue stands eight metres from the edge of the village on the land of Dolni Be'ava. The original of the Radegast statue can be seen in the lobby of the Town Hall in Frenštát pod Radhoštěm. 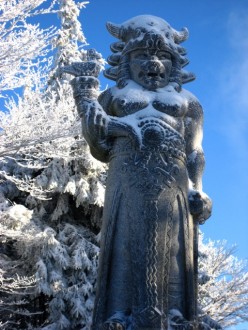 The Sculpture of Sts. Cyril and Methodius

Albín Polášek donated the sculpture to the Matice Radhošťská association in 1930. The sculpture is the antithesis of the statue of the pagan god Radegast, emanating brotherhood and desire for unification. The veined hands of the two men imply that they were used to hard work. In the open book held by St. Cyril we can read the first words of St. John's gospel "In the beginning there was the Word" written in the Glagolitic alphabet, the oldest known Slavonic alphabet. St. Methodius is pointing to the Bible and raising a three-bar Byzantine cross between the haloes.

The hollow sculpture, 2.6m tall and weighing 800kg, was cast in bronze, which, again in contrast with the stone of the Radegast statue, signifies later and higher culture. It rises on a 1.60m high granite foot-stall behind the chapel, on the spot where there used to stand a stone cross. The saints look to the east and to Radegast on the opposite hill and welcome visitors coming to the chapel. 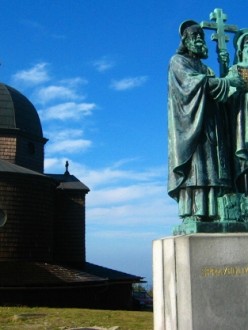 The Monument to the victims of the WWI and WWII

The monument was erected in 1946 by the Národní jednota (National Unity) union from Bystré with financial backing from factory owner Petr Polach. It is the work of sculptor Jan Knebl, native of Trojanovice. He cut it from Hofice sandstone. It is situated in front of the President T. G. Masaryk Jubilee School at Lomná. 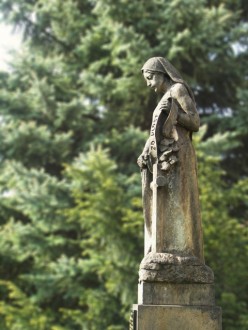 The Statue of Virgin Mary

The statue dates back to 1720 and is a national cultural monument. Its origin is connected with establishing the iron-millers' settlement at Bystré. At the time an iron mill, a fuller, a mill and a timber mill were operating in the area. 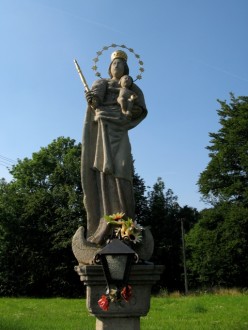 The sculpture is located by the Beskyd Hotel in the centre of Lomná. The author of the sculpture is Frenštát artist Karel Vašut. It was unvei-led in 1985 to honour the 40th anniversary of liberating the country by the Soviet Army. It refers to the 40 years of the rule of one party and its propaganda. 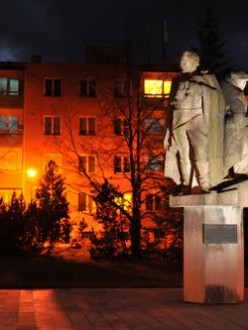